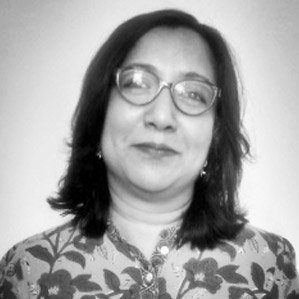 Mrs. Mita Nangia Goswami is currently a Senior Consultant at Swiss Agency for Development and Cooperation. She is the former Vice President of the Independent Power Producers Association of India (IPPAI). At IPPAI, she was building a bridge between the power sector and ecology and the environment.

She has worked in the development sector at the grass roots since 1995 on varied issues like gender, reproductive health and nature conservation before moving to Delhi in 2008. She has also been an educationist, having taught both at the high school as well as the college (Honours) levels.

A member of the North-East Writers’ Forum, she has penned short stories, essays and poems and one of her short stories has been published in a Penguin collection.

She has also authored articles on Environment Education and delivered talks as well as conducted workshops on Education for Sustainable Development (ESD) at various national platforms. Recently Ms. Goswami has trained the Master Trainers of both CBSE and NCERT in ESD at New Delhi and also the SCERTs and DIETS of West Bengal, MP, Assam and Chhattisgarh. She was invited as an ESD expert to the UNESCO world conference 2014 held at Nagoya, Japan.